Home / Blog / Entertainment / Revealed: The Last Assignment General Attahiru Was Going for Before He Died in Plane Crash ▷ Nigeria news

Revealed: The Last Assignment General Attahiru Was Going for Before He Died in Plane Crash ▷ Nigeria news Revealed: The Last Assignment General Attahiru Was Going for Before He Died in Plane Crash ▷ Nigeria news


– Reactions have continued to trail the death of the chief of army staff, Ibrahim Attahiru

– Nigerians have been mourning the sudden death of the military commander

– The cause of the air crash has not yet been ascertained

More details have emerged about the death of Nigeria’s army chief, Ibrahim Attahiru, who died in an air crash while on an official trip to Kaduna.

Legit.ng has learned that the military chief was flying aboard a Beachcraft 350 to Kaduna to attend the Passing Out Parade (POP) of young soldiers from Nigeria Army Depot in Zaria before the crash occurred.

Attahiru and all other military personnel on the plane were said to have died.

The Punch reported that the ill-fated aircraft crashed at the airport’s runway about 6 pm. 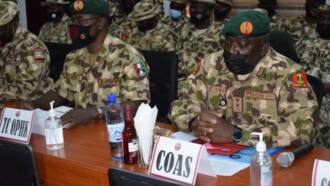 The newspaper stated that the commissioner and chief Executive Officer of the Accident Investigation Bureau, Nigeria, Akin Olateru, confirmed that the people died in the crash.

Meanwhile, the Nigerian Army has confirmed the death of the Chief of Army Staff, General Ibrahim Attahiru, in the military plane crash in Kaduna on Friday evening, May 21.

According to The BBC, the spokesperson of the Nigerian Army, Yerima Mohammed, confirmed Attahiru’s death. Legit.ng could not independently confirm this.

In another news, shortly before his death, the late Gen Ibrahim Attahiru had charged officers and men of the Directorate of Army Public Relations (DAPR) on the need to enhance their capacity on effective information management.

He gave the charge on Wednesday, May 19, 2021, while declaring open a 3- Day Capacity Building Workshop organized for Public Relations Officers by the Directorate of Army Public Relations in Abuja. 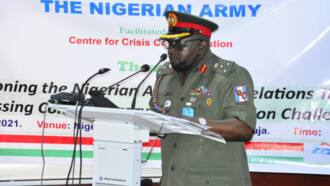 General Ibrahim Attahiru’s last message to officers before his death

The COAS who was represented by the Chief of Policy and Plans (Army), Major General Ben Ahanotu, stated that the workshop is necessary in view of the myriads of security challenges the country is facing.

This he said requires proactive and effective media handling, stressing that dominating the media space is a step towards defeating adversaries.