The Bianconeri had conceded the league title to rivals Inter Milan, ending their quest to win a tenth straight trophy of the Italy’s topflight division.

Andrea Pirlo’s men knew they had to record a win to keep them in contention for second position after Atlanta and Napoli dropped points in their games against Sassuolo and Cagliari respectively. 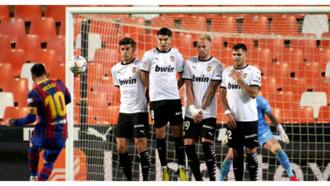 But it was the home team that first took the lead as a quickly taken free kick by Rodrigo De Paul found Nahuel Molina who blasted the ball past Wojciech Szczesny in goal to make it 1-0 after ten minutes.

The Old Lady then turned on the heat in the second half as Udinese defended their lines, creating a stubborn resistance.

Ronaldo won a penalty in the 79th minute after his goal bound free kick hit the hand of a Udinese player among the defensive wall.

The 36-year-old scored the resulting spot-kick to make it 1-1 and gave his team lifeline. And with a minute left to play the Portuguese headed a home cross from Adrien Rabiot to win it for Juve.

It ended 2-1 as Juventus are now level on points with Atalanta in second position and stand a chance of finishing as runners-up in the league. 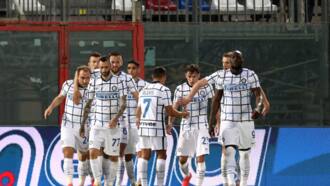 Meanwhile, Legit.ng had earlier reported that Entire staff and players of reigning Italian champions Juventus have reportedly been put on trial for the rest of the season and there could be serious consequence should the Old Lady fail to qualify for next season’s Champions League.

So far this season in all competitions, Juventus have not been performing well as they recently got bundled out of the prestigious Champions League which has put manager Pirlo under pressure.

Currently, Juventus are occupying fourth position on the League table with 56 points and they are on the same point with Napoli who occupy fifth after the same number of games played.