Cristiano Ronaldo alongside his Manchester United teammates were at the receiving end of a humiliating 5-0 defeat at the hands of Liverpool and Old Trafford.

The five-time Ballon d’Or winner played all 90 minutes as the plaudits went to Mohamed Salah who scored a hat-trick.

The 36-year-old scored a brilliant individual effort in the second half but the Video Assistant Referee (VAR) ruled it for an offside.

It was a bad day at the office for United as Jurgen Klopp’s side dominated most part of the game to remain unbeaten in seven meetings against the Red Devils since he became Liverpool manager. 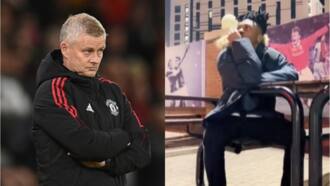 On the other hand, Ronaldo made a motivational post on his Instagram handle apologizing to fans and urged his teammates to move on from the embarrassing defeat.

“They deserve better than this, much better, and it’s up to us to deliver. The time is now!”

Meanwhile, Legit.ng had earlier reported that Man United fans around the world are the saddest people on earth after they were thrashed by Liverpool by 5-0 in front of their home fans. 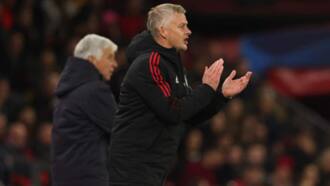 One of the unhappy people is Nigerian music artiste Maryorkun after witnessing the loss at Old Trafford.

Mayorkun’s fellow music colleague Burna Boy and Davido have visited the Theatre of Dreams this season and United were still in top form.

Coming from behind in their last game to beat Atalanta at Old Trafford, the expectation of Manchester United fans was their players to beat Liverpool on Sunday, but they met a more determined side.

Liverpool FC started the game like war in the first half firing in all cylinders and they waited until the 5th minute before scoring the first goal through Naby Keita who got an assist from Salah.