– The US president was heading for a meeting with Asian American community leaders in Atlanta, Georgia, when the incident occurred

– The White House has dismissed concerns about Biden health

President Joe Biden’s health has become a subject of discussion after the president stumbled multiple times then fell to his knees as he climbed the steps of Air Force One on Friday, March 19.

Daily Mail reported that Biden was boarding the aircraft at Joint Base Andrews just before noon for a flight to Atlanta when he stumbled.

A video from Hill.TV showed the 78-year old president gripping onto the railing to steady himself as he lost his footing three times.

It was not immediately clear what tripped Biden, but shortly after recovering, he dusted himself gave a salute at the top of the stairs before departing to meet with Asian American community leaders in the wake of the massage parlour massacre in Atlanta, Georgia. 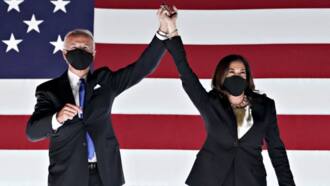 Express.co.uk reported that Biden’s fall sparked a debate on social media as to whether the president is physically or mentally fit to serve in the office.

Legit.ng recalled that in November 2020, the commander-in-chief suffered a hairline fracture in his right foot while playing with his rescue dog Major, requiring him to wear an orthopedic boot for several weeks.

The US president while celebrating the powerful nation’s administration of nearly 100 million COVID-19 doses to its population.

It was not the first time Biden referred to his deputy as president. In December 2020, before the duo was sworn into office, the former vice president gave Harris “an oral promotion” by referring to her as ‘President-elect’ after receiving the COVID-19 vaccine.