Ozumba Mbadiwe, Lagos – The governor of Lagos, Babajide Sanwo-Olu, is very serious about the ban placed on commercial motorcycles in specific parts of the state.

Governor Sanwo-Olu’s position was re-iterated on Tuesday, June 28, when his convoy went after some Okada riders who were plying a major expressway in the Ozumba Mbadiwe part of the state.

A video shared via Facebook by one of his aides, Joe Igbokwe, revealed that unfortunately for the violators who were trying to escape, they ran into the arms of soldiers in one of the Nigerian Army barracks. 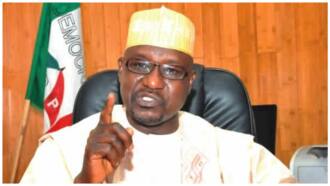 Naturally, the drama that ensued caused a traffic jam on the road as the arrested Okada riders were seen struggling with soldiers and aides of the governor.

The motorcycles of the violators were seized after which the governor’s aides went back into SUVs that were part of the convoy.

“Governor Sanwo-Olu’s convoy chased okada riders into the Army Barracks on Ozumba Mbadiwe where they tried to seek refuge. They were caught and their okadas were seized.”

Following the ban on commercial motorbikes in some major parts of Lagos state, there was a clamour for the administration of Sanwo-Olu to create alternative means of livelihood for individuals affected by the ban.

Speaking to Legit.ng on the development, Gidado Shuaib, publisher of News Digest, an online newspaper, urged the Lagos state government to create jobs for all affected commercial motorcyclists.