Governor Seyi Makinde of Oyo stste has appealed to the federal government to reverse the suspension of Twitter’s operations in Nigeria.

Makinde, who is the southwest leader of the Peoples Democratic Party (PDP), made the appeal in a statement via Instagram on Saturday, June 5.

The politician, who said leaders should not go beyond emotional reactions to issues, argued that the microblogging site had immense benefits for the country.

He warned that the ban will affect the country’s international ratings socially and economically.

Makinde listed some of the positives uses of Twitter in the country to include:

1. The governor stated that Twitter has become the platform for young people and indeed all Nigerians to exercise their fundamental right to express and publish an opinion.

2. The PDP leader pointed out that Nigerians use the platform to complain, argue and give feedback to the government and its agencies who in turn, use these to improve policies. 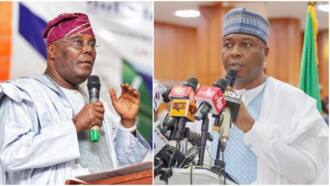 3. He explained that the social media site has become a source of livelihood for many Nigerians.

5. The governor further explained that businesses that do not have physical stores rely on Twitter to advertise their products and services.

Meanwhile, a former Senate president, Bukola Saraki, has called for the reverse of the suspension placed on the microblogging site

The politician stated many Nigerian youths use Twitter as part of their daily lives and a source of their income.

Saraki said banning Twitter was not the right thing to do.

Also, Professor Wole Soyinka has joined the growing number of Nigerians who have spoken out against the ban placed on Twitter by the federal government.

Soyinka reacts to Twitter ban, tells Buhari how he should have dealt with social media giant

The Nobel Laureate said the action did not come as a surprise to him, adding that the move is unbecoming of a democratically elected president.

According to him, if President Muhammadu Buhari has a problem with the social media giant, he ought to find ways of sorting it out privately and not infringe on people’s right to free expression as collateral damage, Channels TV reported.