Home / Blog / Entertainment / “She Loves Him So Much”: Annie Idibia Can’t Keep Hands Off 2baba in Viral Video As He Surprises Her on Set

“She Loves Him So Much”: Annie Idibia Can’t Keep Hands Off 2baba in Viral Video As He Surprises Her on Set

“She Loves Him So Much”: Annie Idibia Can’t Keep Hands Off 2baba in Viral Video As He Surprises Her on Set

Annie and 2baba have been known to have a troubled relationship in recent times but the music star proved that their love is still going strong with his recent move.

The legendary singer stormed a movie set to surprise his wife in the presence of her colleagues. 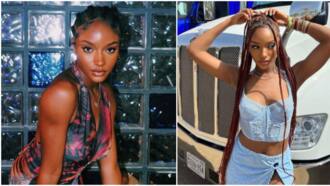 “Just like your mum, we’re twins”: Ayra Starr fires back at troll who likened her to ‘call girl’ over sultry photo

The sweet moment was captured on video by fellow actor, Stan Nze, who shared it on his social media page.

In the clip, Annie was seen with her hands all over 2baba as she continued to hold and hug him to herself while he greeted others on the set.

Annie also had on a very big smile and Stan commented on how her countenance had changed because of her husband.

See the viral clip below:

The video soon went viral online and social media users had different things to say about it. Read some comments below:

“Love the way she’s always all over him my power Lovebirds .”

“These two sha nobody should put mouth for their matter coz na them know each other pass.” 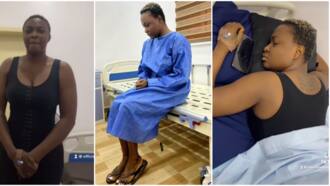 “I love how Annie loves him, it’s so beautiful to see.”

“How can u be almost 50 and you are still looking like her bf. See good stature now.”

“How do you love someone and drag them online when they upset you? ”

“Its how she loves this man. Its so evident in her body language. Its like giving a candy to a child. God bless their home and may they both be happy always.”

The singer’s baby mama took to Instagram announcing that Nino was inducted into his first leadership role as social prefect in his school. 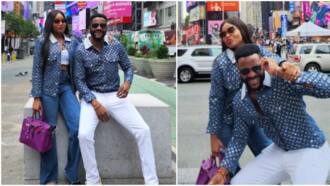 The proud mum pointed out her confidence in the values that have been instilled in Nino despite “horrible things” trending among young minds in the country.

Sunmbo equally shared pictures from the ceremony showing her, the young man and his stepfather together.