Home / Blog / Entertainment / Shy Little Schoolboy Causes Stir in School, Whines Waist Like a Lady as He Dances in Front of Students in Clip

Shy Little Schoolboy Causes Stir in School, Whines Waist Like a Lady as He Dances in Front of Students in Clip Shy Little Schoolboy Causes Stir in School, Whines Waist Like a Lady as He Dances in Front of Students in Clip


A little new student treated his schoolmates to a wonderful display as he showed off his dance skill.

The schoolboy identified as Bright Sam Muhindo was recently enrolled at the Namuwaya Education Centre, Kampala, Uganda after his dance talent caught the eyes of kindhearted folks who ensured he acquired education.

In a short clip shared by Bravo Shoes on Facebook, the little dancer covered his face with his palms as he started off slowly. 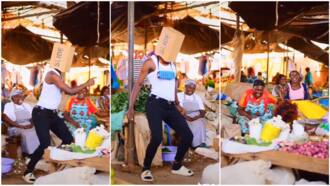 Utilising the small space at the centre created by older students who encompassed him, Bright showed lovely legwork.

He then slowly added feminine-like waist moves to the legwork and would occasionally cover his face while his performance lasted.

The students and teachers couldn’t help but watch the dancehall king in awe.

“He has put a smile on my face – slow moves but sure . God bless you all. Started slow/ small but I believe it’s now God’s speed.”

“Thanks to anyone whom have assisted towards having an experience of education.”

“Bravo shoes people from kasese we thank you so much for what you did bro and God bless you in everything you do sir coz Sam he’s now in another life.” He is amazing: Plus-size man in blue jean takes over wedding with stunning dance, many cheer & clap in video

“This is an inborn talent, before you know it now his helper will locate him and God will lift him up. Keep it up boy.”

Meanwhile, Legit.ng previously reported that a shy girl made to dance in front of people had wowed them with cool body moves.

The video had started with the girl trying to flee the gathering but was quickly dragged back by kids and adults who thought otherwise.

Feeling the vibe of the dance style, a lady joined behind her but stopped in her tracks as the girl quickly broke into a different dance move entirely – this time with her legs.

Her leg moves earned her the admiration of the gathered crowd on the street with people who were previously dancing stopping to give attention to a better dancer.