Home / Blog / Entertainment / “So You Can Talk”: Davido Teases Chioma As She Finally Wows Fans With Video of Herself Talking

“So You Can Talk”: Davido Teases Chioma As She Finally Wows Fans With Video of Herself Talking

“So You Can Talk”: Davido Teases Chioma As She Finally Wows Fans With Video of Herself Talking


Popular Nigerian celebrity on and off couple, Davido and Chioma, recently caused a buzz over their relationship.

The celebrity chef had posted a rare video clip of herself talking and Davido teased her on social media.

Chioma has been known to shy away from social media drama and not many fans have actually ever heard her speaking voice.

However, with her latest post, the mother of one spoke extensively in the video clip as she had to promote a product. 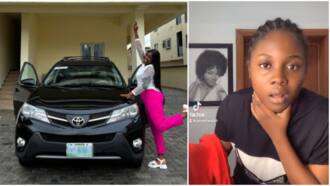 Not long after the clip was posted, Davido took to his baby mama’s comment section.

The DMW boss teased his baby mama over her voice. He wrote:

A number of social media users had a lot to say about Chioma’s post and Davido’s teasing comment. Read some of their reactions below:

“@davido lol seriously ehn! This is the first time am hearing her voice.”

“@davido why re we thinking the same thing lols I have never heard her voice b4 this really crack up.”

“@davido aswear ooo, this is my first time hearing my baby’s voice❤️❤️.” “Prophetess shall not live by Tope Alabi alone”: Funny reactions as Ooni of Ife’s wife dances to ‘Buga’

“You have such a nice voice.”

Meanwhile, Davido has made a big move to stamp his place on the international music scene. He recently partnered with Atlanta-based record label, LVRN.

The DMW boss signed a managerial and partnership deal with LVRN (Love Renaissance) which is also a subsidiary of the Universal Music Group.

The LVRN partnership will have the label take over Davido’s management and also work with his existing team including the singer’s manager, Asa Asika and his lawyer, Bobo Ajudua.