A number of social media users on Twitter and LinkedIn have claimed that a young groundnut seller, whose father is dead, was given a scholarship by the Group Chief Executive at FCMB Group after a commendable display of honesty and integrity.

A social media user, Nurudeen Adeyemi, on LinkedIn, an American business and employment-oriented online service, had claimed in a viral post that a particular young groundnut seller was awarded a scholarship following his display of honesty and integrity during a novelty match among the staff of the First City Monument Bank (FCMB).

Adeyemi, whose byline described him as an “independent Sales Contractor,” said the scholarship was given to the boy by the Group Chief Executive at FCMB Ladi Balogun.

The post, which was made over a month ago, has massively garnered over 15,000 engagements and almost 1, 000 comments on Linkedin. 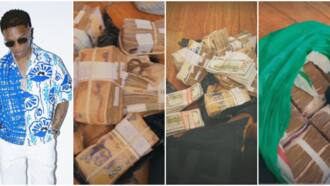 Adeyemi accompanied the post with a picture of the young boy dressed in traditional attire.

“A young boy was hawking groundnuts and the footballers of FCMB who were about playing a novelty match and the Group Chief Executive was in attendance, in which everyone was in a joyous mood, called the boy and asked him to sell all the groundnuts to them.

“After he gave them the groundnut, he was asked the cost and he said everything was #2,100.00k, Ladi Balogun, the Group Chief Executive of FCMB Group Plc, asked his PA to give him #10k but the young boy refused saying he doesn’t know how to explain to his mother where he got #10k, instead of #2,100 Naira.

“He refused the money that his mother will not accept the money. Ladi was touched, he collected the money back from him and asked him to go and bring his mother.

“The mother was afraid and was crying but Ladi told her what happened and how impressed he was with the young boy upbringing and the boy was eventually given a scholarship for his uprightness and integrity.

“The boy’s father is late and was brought up by his mother with other siblings. Despite their condition, he still held on strongly to their family values.

“The best way to encourage truthfulness in your child is to be a truthful person yourself, your child takes his cues from you, so you must try to avoid any kind of deception, even a seemingly innocuous one.”

Having observed that the name of the young groundnut seller, who was claimed to be the beneficiary was not mentioned in all the posts, a Yandex search by Legit.ng on the image was conducted.

The results showed that a similar story accompanied by the same image has been shared by a number of social media users on Twitter. 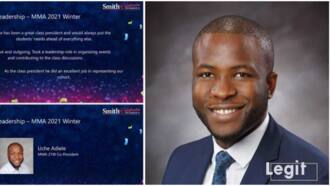 For instance, a Twitter user with the name CBN Gov Akinsola Ak (@cbngov_akin1) shared the post on May 15 on his page.

He captioned: “And the FCMB Boss gave the boy a scholarship for his integrity. I always thank my Mum for this legacy too.She will tell u…. In all you do… Don’t forget the son of whom you are. Never be greedy.”

Another Twitter user, Samuel Omogor (samuelOmogor), also shared the story on his page with the caption.

“That’s little groundnut seller, that refused d offer of 10k, instead insisted on d N2,100 his nuts were worth, right in front of d home of FCMB’s Chairman, Otunba Subomi Balogun @ Ijebu-Ode with his scholarship. Rewarded for holding on to strong family values taught by his mom.”

Ladi Balogun, FCMB boss, who was claimed to have given the young boy a scholarship even liked the original post on Linkedln, suggesting that the story might be true. This is shown in a screenshot below: 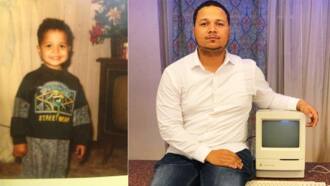 From dumpster boy to billionaire: Man who was abandoned as newborn now owns over N22 bn empire

Further searches by Legit.ng using Google image reverse showed that a few news blogs, The Street Journal and Summitpostnews, even ran the social media post as news. The link is available HERE and HERE respectively.

A search leads to Facebook Page of Adigun Olowe Yoruba

Legit.ng‘s further research on the image via Google Image Reverse led to a Facebook page with the name Adigun Olowe Yoruba. The page is owned and operated by a budding Yoruba proverb and culture enthusiast.

This researcher checked the recent posts on the page from May 2021 but there was no indication that the boy in the picture was awarded a scholarship by the FCMB boss as claimed by a number of social media users.

In fact, the picture attached to the viral post was uploaded on May 2 on Adigun Olowe Yoruba page, and the caption suggested a different thing entirely. 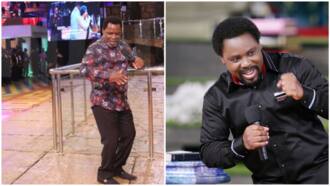 Pronounced dead at 3am: How Pastor TB Joshua died, his last moments during church service

It was taken in an event at the Ooni of Ife palace.

“To the glory of God, I’m officially EWE ASA OODUA. Appreciate the entire body of yorùbá council of youth worldwide under the leadership of the national president Aare Dotun Hassan and my daddy aṣojú ọdọ Aláwọdé Abdulrahmon Akintunde for this beautiful AWARD.”

Who is Adigun Olowe?

He said the four-year-old Yoruba genius “promotes Yoruba culture by reciting more than 200 Yoruba Proverbs with their translation in English language. He has featured on more than one 33 radio stations.”

Adigun Olowe is not new to the media. He has been interviewed by TVC News and BBC News Yoruba. His story has been featured on Legit News and other online blogs.

Oladimeji Ishola said contrary to the claim on social media, his son was given a scholarship by the FCMB boss.

“This is really provoking. My son’s picture has already been used for what he did not get. I need to sue whoever fabricated this.”

Many people have been misled into believing that the boy in the viral picture, Adebayo Olamilekan Israel popularly known as Adigun, was awarded a scholarship. This is false.