Colombian officials said Monday that the son of a notorious paramilitary leader has won an election to be a special member of Congress representing victims of the conflict.

On Sunday, Columbia held elections for both the Senate and its lower House of Representatives in which the left finished ahead.

For the first time, victims of the conflict between the government and the ex-guerilla FARC group — who signed a peace deal in 2016 — will have their own representatives in Congress.

For the next two legislatures, until 2030, 16 seats will be reserved specifically for victims in the regions most impacted by the conflict.

Those regions in northern Colombia have seen a rise in violence recently, as armed groups battle for control of prized narcotrafficking corridors.

Jorge Tovar, the son of the former paramilitary chief known as “Jorge 40,” has been elected to one of those seats. The lawyer-by-training celebrated his victory on Twitter: “The moment has come to change history.”

His father was the leader of a right-wing paramilitary group known as the Northern Block, which wreaked havoc in the 1990s in its battle against left-wing guerillas.

He returned to Bogota in 2020 after serving a prison sentence in the United States for drug trafficking.

While currently living freely, he still faces dozens of lawsuits for massacres and forced displacement.

His son’s election drew sharp criticism, especially from victims’ organizations such as the Movement of Victims of State-Sponsored Crimes, which alleged “corruption and paramilitarism have taken over” the region, and echoed allegations of vote-buying.

“The son of Jorge 40 is now the representative of the victims left by his father,” said leftist Senator Gustavo Bolivar.

Sunday’s legislative elections also marked a new setback for the Comunes (Commons) party, which was formed by the former Marxist guerrilla group FARC. 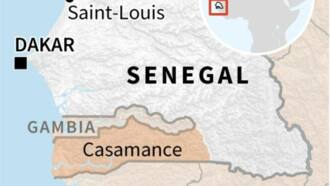 “The numbers in the legislative elections were not what we expected. As a party, we will make the corresponding analyses,” said the far-left party.