– Jude Idimogu, the lawmaker representing Oshodi/Isolo Constituency II in the Lagos state House of Assembly, says Tinubu is the best man for the job

The lawmaker representing Oshodi/Isolo Constituency II in the Lagos state House of Assembly, Honourable Jude Idimogu, has declared that the southeast is not ready to produce the next president because it remains divided politically.

Idimogu urged the zone to align with the centre before it can stand a chance to vie for the presidency.

He made the comment at a rally organised by the Abundance United Movement (AUM), a political group in support of Asiwaju Bola Tinubu 2023 presidential ambition. 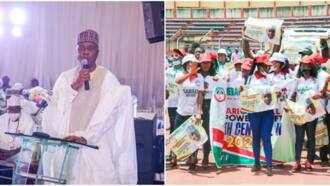 The Nation quoted Idimogu who hails from Imo state as saying:

“I am Igbo but from what I have seen, the southeast is not ready for the presidency. Right now, APC is at the national level, but how many APC states are there in the southeast? Power is not given a la carte, you must work to get it.

“Things would only work for the southeast if the PDP can take power there because the zone has been loyal to the party but, as of now, the zone is not ready.”

Idimogu described Tinubu as the best to rule Nigeria from 2023, stressing that the former Lagos state governor is a great achiever.

According to him, the APC national leader is the most qualified person for the presidency in the next election.

Idimogu, who said everyone and zone have the right to aspire for any position in 2023, insisted that Tinubu remained the best person to rule Nigeria from 2023.

“Tinubu has people all over the country. He is a detrabilised Nigerian and I have not seen anybody that would be like him.”

Meanwhile, serving Speakers and their predecessors from the northwest zone of Nigeria have declared their support for Tinubu as the successor to President Muhammadu Buhari in 2023.

Their declarations and promises were made weeks after a similar endorsement of Tinubu was carried out by their colleagues in the southwestern zone of Nigeria.

At a meeting held in Kano for the states in the northwestern zone on Friday, March 26, the lawmakers declared that Tinubu remains the right person for the presidential ticket of the APC at this time. 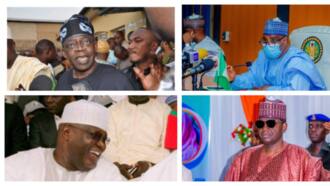 In a related development, a former military head of state, General Yakubu Gowon (rtd), recently called for the zoning and rotation of the presidency among the six geo-political zones of the country.

This, he said, remained paramount for the tranquillity, development, and growth of the country.

Gowon made the comment at the 100th anniversary of the Barewa Old Boys Association on Saturday, March 20.