Squeeze It Tight: Anita Joseph Encourages Hubby to Grab Her Backside As They Dance in Cute Video ▷ Nigeria news

Squeeze It Tight: Anita Joseph Encourages Hubby to Grab Her Backside As They Dance in Cute Video ▷ Nigeria news

– The actress shared lovely photos with her husband, stating that it’s been four years of peace of mind with him by her side

– Anita then prayed that they would do 100 years together, noting that she would choose him all over again

Nollywood actress Anita Joseph and her husband MC Fish are celebrating their four years anniversary of meeting each other in the sweetest way.

Anita had lovely things to say about her husband as she noted that the past four years have been the best of her life.

In the mood of celebration, the actress shared a video of herself dancing with her man. In the video, MC Fish was seen grabbing the actress’ backside while she rocked him. 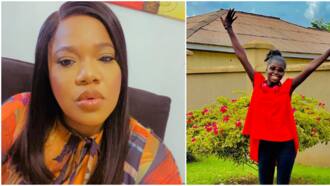 In the caption that accompanied the video, Anita said she liked the way her husband grabbed her. She encouraged him to also squeeze her tight, noting that she loves it.

Anita’s video got a lot of her celebrity friends and fans hailing her and her husband in the comment section.

“I watched this 26 times …so beautiful. Omo try and marry your playmate…over seriousness no Dey make marriage.” Your husband no get picture? Nigerians react as actress Ruth Kadiri celebrates hubby’s birthday without photo

Love in the bathroom

There is no doubt that actress Anita Joseph enjoys the attention and care her husband showers on her, however, Nigerians seem to have a problem with her sharing everything online.

Legit.ng earlier reported that Anita took to her Instagram page to share a video of herself in the bathroom, getting cleaned up by her hubby, MC Fish.

Although she didn’t expose any body parts, a hand – presumably her husband’s – can be seen pouring water on her body as she speaks to the camera in the inaudible video.

Well, fans were not so pleased with the actress putting up what they considered an intimate video. Several internet users took to the comment section to blast the actress, calling her ‘jobless’ and ‘shameless’.