Super Eagles captain Ahmed Musa has shown that he is not all about playing football after being filmed spanking an opponent in a snooker game.

The winger who currently plays for Nigeria Professional Football League side Kano Pillars was seen potting balls back-to-back on the board.

His moves excited the onlookers who appeared astonished with the football star showing incredible skills away from the pitch.

Meanwhile, Musa has made five appearances for the Kano-based NPFL club, providing one assist in the process after re-joining them in April 2021. 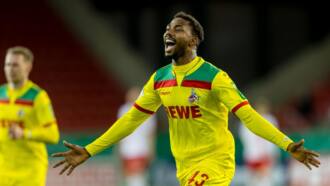 The 28-year-old is also seeking a move back to top European Leagues after attempts to join West Bromwich Albion collapsed during the winter transfer window.

Before joining Pillars on a short deal, the Nigerian forward parted ways with Saudi Arabia Premier League side Al Nassr towards the end of 2020 in search of a more competitive league.

However, the move ended up being a bad one as the attacker stayed clubless for over six months before deciding to join the NPFL side – leaving him match-rusty for national team assignments.

Legit.ng earlier reported that Super Eagles skipper Ahmed Musa has taken to his Instagram page to post short video of himself in his garage in Kano state thanking God for his blessings on him. 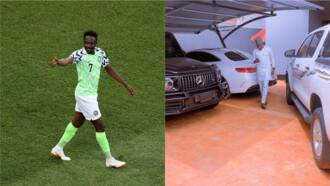 The Kano Pillars striker is one of the richest Nigerian players thanks to football who made Ahmed Musa what he is today.

In the video posted by the former Leicester City striker, three expensive vehicles can be seen around him while pressing his phone before taking a stroll.