Lagos state – Brenda Ataga, the wife of the late Chief Executive Officer (CEO) of Super TV has threatened to sue bloggers who make false claims about her husband who was murdered by a suspect in an apartment in Lagos state.

The Punch reported that the legal representative of the family, Olusegun Jolaawo, in a statement cautioned members of the public to desist from making unverifiable claims about the incident.

At last, Lai Mohammed reveals the system of government Buhari is running

“Our client requests that the well-meaning public allows the family to mourn their departed son, father and husband with some privacy and decency.

‘’Our client also feels very strongly about the unbridled activities of bloggers on the social media space with respect to this incident and firmly demands that the said bloggers desist from peddling falsehood aimed at maligning the deceased, his wife, and children.”

Jolaawo demanded that the false publications and the several ordinarily unrelated stories and pictures of the late Usifo and Brenda Ataga be pulled down.

He warned that his client will take prompt and appropriate action to seek redress for the apparent instances of libel and slander as appropriate.

This Day reported that the family of the late media CEO appealed to members of the public with useful information on his murder to give such information to the police. 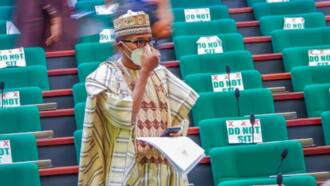 A member of the family, Dr Isi Ataga, in a statement stated that they have questions of their own adding that the facts as revealed by the police so far didn’t add up.

“If you have any information, don’t hide behind online posts. Instead, come forward and share it with the police.”

Meanwhile, a 21-year-old Chidinma Ojukwu has been arrested by the Lagos state police command for allegedly killing the chief executive officer of Super TV, Usifo Ataga, in the Lekki area of the state.

The Punch reported that the state commissioner of police, Hakeem Odumosu, said Chidinma is an undergraduate of the University of Lagos (UNILAG), stating that she had confessed to committing the crime.

Legit.ng gathered that Ojukwu was paraded at the police command headquarters in Ikeja on Thursday, June 24.