Lagos – The Synagogue, Church Of All Nations (SCOAN) has released a statement concerning the funeral of its late founder, Prophet Temitope Balogun Joshua, also known as TB Joshua.

The statement was shared on the official Facebook page of the church, detailing that the late prophet will be buried within the precincts of the church.

The statement also made it clear that the death of Prophet Joshua does not mean the end of his ministry, stressing that the church will move on. 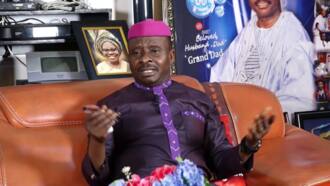 An emotional but firm statement

“We are currently preparing for the week-long service from Monday 5th to Sunday 11th July 2021 in honour of Prophet TB Joshua’s life and legacy. He will be laid to rest at The Synagogue, Church Of All Nations (SCOAN) in Lagos, Nigeria.”

Some members of the church have been reacting to the message.

“Rest in eternal peace Senior prophet TB Joshua. It’s hard to say goodbye to a loving person as you were. Indeed your legacy lives on! Let love lead!”

“He may not be in our midst but his teachings about the word of God still live in our hearts. He planted the spirit of God in us.”

“I tap into the anointing on Prophet TB. May his death renew our faith in Christ Jesus.” Legit.ng had earlier reported that a family source who spoke on the condition of anonymity, said TB Joshua may be buried on Friday, July 9, in the church premises.

According to the source, the date was fixed after the immediate and extended members of the family of TB Joshua met on Friday, June 12.

The decision is contrary to the expectation of the monarch of Arigidi Akoko, Oba Yisa Olanipekun, who wanted the late prophet in the town, where he hails from.

Meanwhile, the Christian Association of Nigeria on Tuesday, June 8 broke its silence on the death of the prophet and expressed condolences to the family of Prophet TB Joshua and the SCOAN congregation.

The Christian body’s sympathy message came three days after the demise of the Ondo-born prophet who died on Sunday, June 6.

Before then, many Nigerians had wondered why CAN has been silent on the death of Joshua, despite his massive followership and influence in Nigeria’s Christian community.