UK – Embattled former Senate deputy president, Ike Ekweremadu, and his wife, Beatrice, have arrived in the courtroom of the Westminster magistrate court for their trial.

The Cable reports that the Ekweremadus arrived at the court about two hours later than the time the proceeding is expected to begin.

More secrets about boy Ekweremadu took to UK emerges, where he lives, what he does for a living

Meanwhile, more facts had emerged over the identity of David Ukpo Nwanmini, the boy who was taken to the United Kingdom for organ harvesting by the former deputy senate president, Ike Ekweremadu, and his wife, Beatrice.

According to an acquittance who is a businessman and laptop engineer, Oyekan Tobi, the boy is definitely not a 15-year-old boy.

Tobi, who is also a postgraduate student of the Nigeria Institute of Journalism, Ogba Lagos, spoke after the passport of the allegedly 15years boy surfaced online.

According to him, the boy on the passport with the name David is from Ebonyi state and assists his elder brother, Linus (also known as) Mile 2 in the market with customers. P

“His elder brother deals in phone accessories, it is false to say the boy is 15 years old because a boy of 15 years won’t have that energy to be dragging customers in the market with other boys. He’s not a boy you can slap on the way and walk away easily. Hence, he should be in his 20s.” 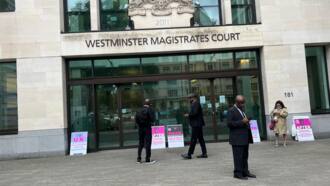 Within the past few days, things had turned out terribly bad for Ike Ekweremadu, former deputy senate president.

The recent against him affected his wife, Beatrice, as well as they were both arrested and charged to court for bringing a child to the UK for organ harvesting. The metropolitan police said the pair were charged to court following an investigation by the police’ specialist crime team.

The police added that the investigation was launched after detectives were alerted to potential offences under modern slavery legislation in May 2022.