– According to the police, the arrested suspects were involved in the killing of security agents and other criminal acts in the region

The Nigeria police have arrested 16 members of the Indigenous People of Biafra (IPOB) and recovered guns and bombs from them.

PM News reports that this was disclosed in a statement released by the spokesperson of the police, Frank Mba, on Sunday, March 27.

The police, according to the newspaper, accused the arrested suspects of being complicit in a series of violent and unprovoked attacks on security operatives and facilities in the southeast region and other states.

Legit.ng gathers that the arrest was the outcome of a joint effort by the police, the Nigerian Army and the Nigerian Airforce, to nab persons responsible for the emerging trend of attacks on security personnel and wanton destruction of security facilities. 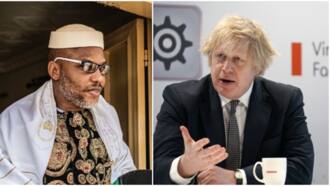 The arrested suspects include Ugochukwu Samuel, a 28-year-old from Arochukwu LGA in Abia state; Raphael Idang, a 31-year-old native of Odukpani LGA of Cross River state.

Others were Cletus Nwachukwu Egole, a 60-years-old native of Orlu in Imo state; Michael Uba, a 33-year-old from Imo state.

Twelve other suspects were not identified.

The police said its investigations confirmed the suspects were implicated in multiple felonies committed across several states in the southeast.

The suspects were allegedly involved in the murder of security personnel, stealing, unlawful possession of firearms, arson and so on.

It added that they will all be charged to court on the conclusion of investigations.

Meanwhile, some activists from the southeast have written a petition asking the United Kingdom to extradite Nnamdi Kanu to Nigeria for allegedly inciting violence in the country.

The group under the auspices of Igbo Youths in Nigeria and Diaspora, submitted the petition to British High Commission in Abuja, Nigeria, alleging that Kanu, who heads IPOB is promoting a breakdown of law and order in the southeast region.

The activists in a video posted on YouTube on March 25, 2021, accused the IPOB leader of ordering his group, the Eastern Security Network (ESN) to attack police and military personnel in the southeastern part of the country.