– Hakim Ziyech and Emerson were the goalscorers in the second-leg

Chelsea progressed to the quarterfinals of this season’s Champions League following their 3-0 aggregate win over Atletico Madrid.

A goal each from Hakim Ziyech and Emerson were all the Blues needed in the second-leg of their last-16 encounter at Stamford Bridge on Wednesday night, March 17.

The west Londoners went into the return leg with a 1-0 advantage salvaged in the reverse tie played in Romania. 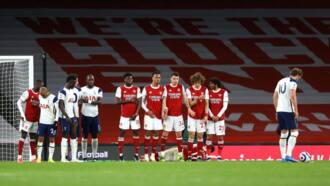 Olivier Giroud was the man of the moment at the time, with the Frenchman netting a delicious trademark bicycle goal to inspire his side to victory.

Chelsea, therefore, were out in search for a draw of any scoreline to ensure their safe passage to the quarter-finals.

However, rather than play defensively, Thomas Tuchel’s men got the better of their visitors as they dominated in every department of the match.

But despite their advances, it was Atletico who had a chance to break the deadlock first after Yannick Carasco looked set to score before he was brought down in the area by Cesar Azpilicueta.

Bizarrely, the referee brushed off the incident, allowing play to continue – much to the chagrin of the Spanish side.

Aware of Atletico’s threat, Chelsea took the lead minutes later through Ziyech who fired the ball low and hard past Jan Oblak following a blistering counterattack initiated by N’Golo Kante.

Things went from bad to worse for Diego Someone’s men 10 minutes to time after Stefan Savic was handed a straight red card for an elbow into the chest of Antonio Rudiger.

The hosts went on to take advantage of Atletico’s numerical deficiency to extend their lead at stoppage time through Emerson who scored with his first touch of the match.

The victory saw them book a place in the quarter-finals of the tournament to keep their European dream alive.

They join Premier League rivals Liverpool and Man City, both who are already in the last eight of the competition.

Legit.ng earlier reported that Manchester City have booked a place in this season’s Champions League quarterfinals after seeing off Borussia Monchengladbach in the Round of 16.

City stunned Monchengladbach 4-0 on goal aggregate in the two-legged affair to book a place in the last eight of the European competition.

The Premier League giants stunned the German outfit 2-0 in the reverse tie, before securing victory by a similar scoreline in the second leg played at the Puskas Arena in Budapest on Tuesday night, March 16, to sail through.