Three friends have showcased their automobile ingenuity in an incredible fashion.

The unidentified men, according to TRT World created cars that drive on the water themselves.

Legit.ng gathered the car was made using local materials. So far, they have been able to produce 12 of its kind in Egypt and have received numerous orders for the cars.

Internet users can’t get enough of it

Social media users have gushed about a video showing the cars being test-ran on the sea. Many daydreamed about owning one. 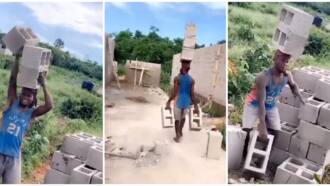 “I Already drive this car on GTA vice city game so it’s not new thing for me.”

“When u calling it car , it means it can also drive on road? if not so how can u call it a vehicle? its simply a boat designed in car shape.”

“And im still waiting for the flying car…”

Meanwhile, Legit.ng previously reported that a young Nigerian man who had built a fine sports car said he once sold his phone to survive.

According to him, building a fast car in Nigeria was quite a challenge as it is not common. Jerry said he had to conduct so much research online.

The young Nigerian disclosed that he took inspiration from the rabbit’s ability for speed and balance, noting that he wanted to replicate the same with his car.

He said he had always wanted to work in the automobile industry since he was five years old, adding that he and his friends made cars with pieces of roofing sheets when they were kids.