The death toll in a train crash in southeastern Democratic Republic of Congo has been revised upwards to 75, with 125 injured, rail officials and the communications ministry said Sunday.

Officials on Saturday gave a toll of 60 men, women and children killed and 52 injured in the accident, which happened on Thursday night when a freight service train derailed.

The new toll came from Fabien Mutomb, the head of the state railway company, the SNCC, after he visited the site with a team assembled to investigate the disaster.

Among those injured, 28 were in a critical condition, said the communications ministry.

On Saturday, the SNCC’s director of infrastructure Marc Manyonga Ndambo told AFP the train had been made up of 15 wagons, 12 of them empty.

It had been coming from Luena in a neighbouring province destined for the mining town of Tenke, close to Kolwezi, when the accident happened. 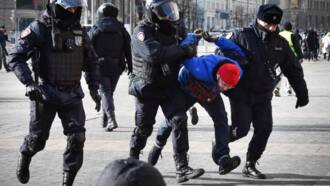 More than 800 detained in Ukraine protests across Russia

It was carrying several hundred stowaways at the time, said Manyonga Ndambo, speaking by phone from Lubumbashi.

On Sunday, he said the track was cleared earlier in the day but the wagons involved in the crash still had to be towed away.

People regularly jump rides on freight trains to travel across the vast country because of the lack of passenger trains and the difficulties of travelling by road.

Mutomb is expected back in Kinshasa on Monday to report on the extent of the damage, the communications ministry said.