– Andrea Pirlo has been sacked as the head coach of Juventus

After just one League season in charge, Italian giants Juventus have announced the sacking of Andrea Pirlo as their coach with the Old Lady expected to name a replacement as soon as possible.

Andrea Pirlo was a surprise candidate to replace Maurizio Sarri at Juventus last summer as the Old Lady chiefs decided to give their former player the chance in coaching.

Andrea Pirlo did not impress the club’s chiefs as Juventus failed to retain the League title and they also failed to win the Champions League.

Allegri is now expected to make a return to Turin. During his first stint with the Old Lady from 2014-19, Allegri and his players were in great form winning the Italian Serie A title five times. 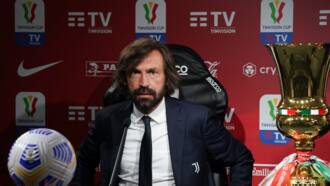 In an official statement Juventus posted on their website, they thanked Andrea Pirlo for his services stressing that the decision to axe him was a difficult one.

“Thanks Andrea. These are the first words that all of us must pronounce at the end of this special experience lived together.

“For the courage, the dedication, the passion with which he demonstrated every day, our thanks go to the ‘Maestro’, the coach and to Andrea, that really comes from the heart, as well as our good luck for the future that will surely be a wonderful one.”

Earlier, Legit.ng had reported how Cristiano Ronaldo picked up his only trophy for Juventus this season and the striker showed that it meant a lot to me when slept off with his arms wrapped around the silverware.

The Bianconeri have had a difficult campaign under new manager Andrea Pirlo with their hopes of qualifying for the Champions League hanging in the balance.

There was still something to smile about when the Old Lady defeated Serie A rivals 2-1 in the Coppa Italia final.

Juve were beaten in last season’s final by Napoli but did not allow history to repeat itself with Dejan Kulusevski and Federico Chiesa scoring in each half of the match.

Ronaldo did not find the back of the net but it did not matter as Juventus won the Coppa Italia in style at the Stadio Mapei, home ground of Serie A club Sassuolo.