The presidency is under serious heat over the alleged plan to track, intercept and monitor WhatsApp messages, phone calls, and text messages of Nigerians.

This came after the proposal in the Supplementary Appropriation Act signed in July 2021 to spend N4.87 billion to monitor private calls and messages, Premium Times reports.

In a suit against the presidency and Attorney-General of the Federation and Minister of Justice, Abubakar Malami, the Socio-Economic Rights and Accountability Project (SERAP) argued that the proposal will infringe on citizens’ rights to freedom of expression and privacy, The Cable added.

The suit was filed at the Federal High Court on Friday, October 15, on behalf of SERAP by its lawyers, Kolawole Oluwadare and Kehinde Oyewumi.

Frowning at this, SERAP noted that the move to monitor the online interactions of Nigerians will grant government agencies free access to conduct mass surveillance of peoples’ communications.

Part of the suit read:

“The mere threat of mass surveillance, even when secret, coupled with the lack of remedy, can constitute an interference with human rights, including the rights to privacy, freedom of expression, peaceful assembly and association. 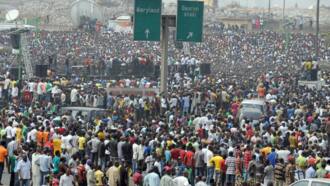 Going further, SERAP warned that the “powers to conduct arbitrary, abusive or unlawful surveillance of communications may also be used to target political figures and activists, journalists and others in the discharge of their lawful activities.”

“End-to-end encrypted backups for WhatsApp starting to roll out today. Proud of the team for continuing to lead on security for your private conversations.”