“Who Be Lee Min Ho Where Eni Dey?”: Media Personality Enioluwa Brags As He Flaunts Birthday Gifts in Photos

“Who Be Lee Min Ho Where Eni Dey?”: Media Personality Enioluwa Brags As He Flaunts Birthday Gifts in Photos

The online sensation clocked a new age on July 6, 2022, and made sure to keep fans updated on how it went on his social media page.

In a recent post, the celebrant took to his official Instagram page to show off the amount of gifts he received from friends and well-wishers. 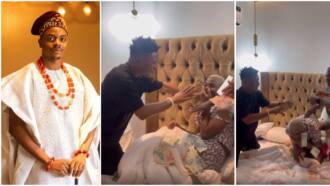 He made sure to spread out the gifts before him and take a photo as he showed his gratitude on social media.

Enioluwa also compared himself to popular K-drama star, Lee Min Ho, who has been known to receive truckloads of gifts on his birthday.

In his caption Eni wrote:

“Wishing you a belated happy birthday my bro.”

Taking to his official Instagram page, Enioluwa posted a video of how his friends surprised him on the morning of his big day.

In the viral clip, the socialite was woken up by his friends with a trumpeter aka “panranran” who played the off-key version of the happy birthday song. 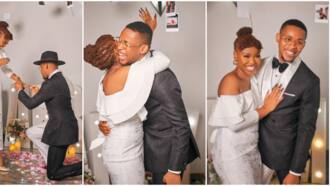 “We’ll be getting married”: Writer Solomon Buchi announces as he pops the question, shares proposal photos

Not stopping there, his friends also took things further by making it rain crisp N10 and N20 notes on the birthday boy.

Not long after the socialite posted the clip of his birthday surprise online, fans and celebs took to the comment section to react.