– A former governor of Zamfara, Abdul’aziz Yari, warned Matawalle against taking such a political decision

A report has emerged that Governor Bello Matawalle of Zamfara state risks losing his governorship seat if he defects from the Peoples Democratic Party (PDP) to the All Progressives Congress (APC).

A former governor of Zamfara, Abdul’aziz Yari, made the statement on Sunday, April 11, at the APC secretariat in Gusau, the state capital, The Punch reported.

Yari who was represented by Senator Kabiru Marafa explained that based on a judgment of the Supreme Court, any Zamfara PDP elected official who defects will lose the position he holds.

I don’t have any reason to leave PDP, says Governor Ikpeazu

“As such, until after that period, any PDP elected officer who defects to another party must also vacate his seat going by the court’s judgment.”

Yari claimed that Matawalle was being misled by some people to join the APC.

He stated that the politician has forgotten the circumstances that made him become the governor of the state.

Meanwhile, a report by PM News has indicated that Governor Matawalle may dump the PDP for the APC any moment soon.

A source in the ruling party said the quest to get a second term in office in 2023 is the major reason behind the governor’s move to the APC.

According to the report, the source said the governor has been told that there’s no guarantee of a second term if he remains in the PDP. 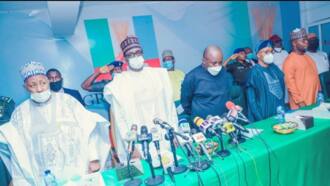 In another report, prominent members of the PDP, including governors and senators, have visited Governor Bello Matawalle of Zamfara state in a bid to stop his reported moves to return to the ruling APC.

Daily Trust reported that six PDP governors and other chieftains of the party met with Governor Matawalle in Gusau, the state capital, on Wednesday, April 7.