– David Malpass, the World Bank president, said there may be an extension of the debt suspension plan by the G-20

– Malpass made this known on Monday, April 5, according to the report

A report by Bloomberg indicates that the Group of 20 gatherings of finance ministers from the world’s largest economies is likely to extend debt-service suspension initiative for poorer nations until the end of the year.

Legit.ng gathered that the World Bank president David Malpass said on Monday, April 5, that the extension of the reprieve in debt-service payments by many of the world’s poorer nations would probably be the final.

The World Bank said the G-20’s Debt Service Suspension Initiative, which took effect in May 2020, delivered $5 billion in relief for more than 40 countries in 2020. The G-20 had in October 2020, extended the programme, originally set to expire in December 2020, through June, and agreed to consider a further six-month extension later.

Malpass noted that the World Bank has made good progress in helping countries through the pandemic, but much work remains to be done to achieve sustainable and broad-based economic growth without harming the environment or leaving hundreds of millions of families in poverty.

“I expect resources will be a challenge. I think there will be years of greater need for deeply concessional resources.”

Meanwhile, Legit.ng had previously reported that former vice president Atiku Abubakar claimed Nigeria paid off her external debt between 1999 and 2007.

It was reported that he also alleged that Nigeria maintained a 6% GDP growth within the same period.

It was discovered that the claim that Nigeria paid off her external debt between 1999 and 2007 is false. 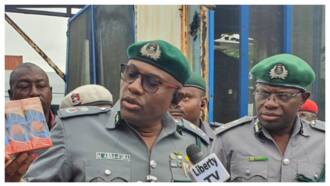 Customs’ boss proposes ban on vehicles above 7 years in Nigeria

Nigeria’s debt records, according to the DMO, indicate the country still had an external debt of $3.65 billion as at December 2007.

However, the claim that Nigeria maintained a 6% GDP growth between 1999 and 2007 is mostly true, according to the data from the World Bank, IMF, and BudgiT.

According to the report, in 1999 when Nigeria returned to civilian rule, the country was owing $28.04 billion in external debt, according to the DMO.

Further breakdown of the debt stock shows that out of the total external debt, $20.5 billion (about 73%) was owed to Paris Club, a group of official money lenders established in 1956 with its secretariat located in Paris.