– Many expressed surprise at the hairstyle as they congratulated her

A young lady has basked in the euphoria of finishing university in grand style.

The overjoyed woman took to Twitter to announce the academic achievement while throwing shades at her haters.

@abarbiewrld shared beautiful photos as she took different poses with her academic gown, but there was something else.

The lady had an unusual hairdo. She rocked a customized hairstyle that had the current year plaited into it.

Social media users flooded her comment section with congratulatory messages just as many others couldn’t help but notice her hairdo. 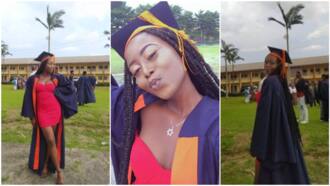 “Ma’am!!!! Congratulations! I’m wishing you much success in your future!!!”

“U r the baddest !! May u be successful and prosperous.”

“Omg, your look is EVERYTHING!

“Congratulations, I’m soooo proud of you!”

“I just saw the stylist’s tiktok of your hair too omg.. you look bomb and congratulations!!”

“Idk what you told the stylist but I’m glad it was said!”

“The hair, the strut, the confidence, the degree…the everything.”

Meanwhile, Legit.ng previously reported that a 19-year-old lady had stunned social media with her results breakdown as she celebrated bagging a first-class.

Bilqees Lawal, celebrating the feat on LinkedIn, said she only became a first-class student in her final year as she had started off with a 3.92 GPA in her first year. 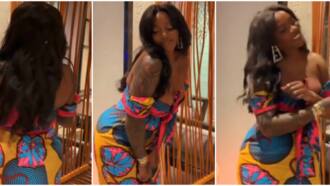 Things took a different turn for the 19-year-old as she began developing the growth mindset and the belief that her academic performance could be improved upon.

The accounting graduate of Achievers University stated that she worked for it and was excited it has become a reality.